Travel – it’s what a lot of us look forward to as we get older, and as I approached 75 I really wanted to make what might possibly be a final trip to Europe. And so I set off last month, first to a conference in Barcelona, then on to London and Sussex (work plus a nostalgia hit), and finally to Italy, because it was the only western European country I’d missed out on. I wanted to get the most from this adventure, so I went into ‘training’. Walking, swimming, dancing to Abba in my lounge room. I lost weight, I felt better, stronger, more energetic; I was raring to go despite my still dodgy hips and ankles. And then there’s my feet – but more about my feet later! There wasn’t much I could do about an unanticipated European heatwave.

In Barcelona there wasn’t much time for anything other than work. The city was heavily overcast and most of the time, the heat was oppressive. We walked a lot, around the ancient and beautiful university buildings and campus, and to various restaurants and other venues. My feet mentioned that they didn’t much like the heat, nor the amount of standing. Finally, on the morning of the day I left the storm broke, clearing the air, reducing the temperature, refreshing the city and, I suspect, lifting most people’s spirits. I had a wonderfully interesting and intellectually invigorating time. My feet were less enthusiastic.

I went to Sussex for research for a book, but also to revisit the past. My memories are rich with memories of green fields, forests, winding lanes the smell of freshly cut grass, and long, mild, summer evenings in the gardens of quaint country pubs. But the first thing I noticed was a widespread absence of grass – or at least green grass. The rising temperatures has left most lawns, parks, fields and verges burned to a crisp. But it was still Sussex, still the place I’d lived for almost half my life. My feet mentioned they were uncomfortably hot, but happy that I was driving everywhere. And then it was time to return the car and take the train to London.

Friends in Australia sent me jokey texts about the feeble British who can’t handle the heat, unlike us rugged Aussies. Shhh! Don’t tell anyone – but I couldn’t take the heat either; 37C in London feels a whole lot hotter than the same temperature back home in Perth. No idea why. London was heaving with tourists, many heading for shops, bars or restaurants on the assumption that they would be airconditioned. But the last great European heatwave was in 1961; why would you bother installing aircon? England seemed burned out, exhausted. By the heat? By Brexit? By the shenanigans of an unstable Government and an inadequate opposition? By the visit of Donald Trump? My feet said, ‘We don’t like this, can you go back to driving please?’ Don’t worry, I told them. Italy next, gorgeous green Tuscan hillsides, and woodlands, and we’ll have a car.

In Italy I fell in love: with the country, the way of life, the streets of Florence, it’s plethora of glorious churches, magnificent buildings, steep picturesque side streets, piazzas where we tucked in to gelato and observed the passing glamour. Most of all I fell in love with the Tuscan countryside and what its pristine condition, and the obviously loving custodianship of and respect for the land, seemed to say about the Italians themselves. We drove along narrow winding lanes and roads, sharp bends and steep hills, through olive groves, vineyards, bay trees, cypress and Lombardy pines. We visited tiny hilltop villages, in which tourism was minimal. And we walked a lot, climbed a lot, traversed cobbles, uneven paving and went up hundreds of steep stairways. My feet didn’t like it; they complained bitterly. I tried to appease them with new, tougher, walking shoes (yes there really is a branch of Foot Locker in the centre of Florence). My feet would not be appeased.

My son took off to Portugal for the rest of his holiday. I took the train to Milan and then to Varenna on Lake Como, a place I have longed to visit. It lives up to and beyond, both its reputation and my dreams. I am captivated by the vast gleaming expanse of the lake and its subtly changing colours, that craggy faces of the mountains, the small towns and villages clustered along the shore line. On the tree-clad slopes ancient villas and castles, towers and churches are tucked into the tree clad slopes as if scattered there by some divine hand. Heaven! No – hell – said my feet!

Four days on my feet have resigned. They swelled way beyond the confines of my shoes, including the new ones. Just a pair of sandals are almost bearable. Gout! Look – I didn’t eat that much gelato! I have had one glass of sparkling wine in four weeks. And now I am shifting between my bedroom balcony and the hotel terrace, in a lot of pain, barely able to walk. Grounded again! May have to call the airline for assistance on the way home if my feet don’t improve by the end of the week.

My advice: take a trip – see Italy! See it soon – we never know how much time we have left. Oh! And – make sure you leave your feet at home. 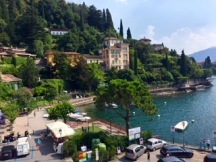 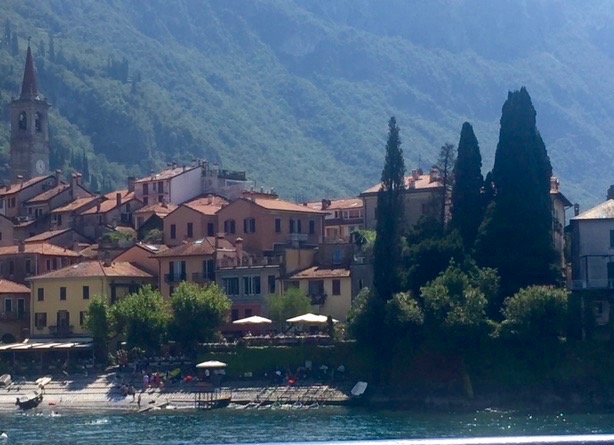