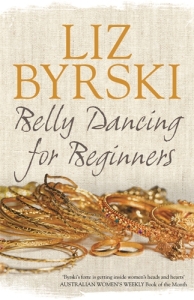 Thank you for choosing Belly Dancing for Beginners for your book club. I do hope you enjoy the book and have an interesting discussion. Here are some discussion points you may like to use.

Why are older women so rarely the subject of Australian popular novels? And why, when they are depicted, are they so often in negative stereotypical roles; interfering mother-in-law, nosey neighbour, frail and complaining elderly relative, bitter and boring spinster?

When did you last see an Australian tv drama that was focused on the life of an older woman or women and portrayed her/them in a positive way? How often do you see older men as interesting central characters? Consider the frequency with which you see actors such as John Waters, Colin Friels, John Howard, John Wood, Geoffrey Rush, Charles Tingwell and Ray Barrett, compared to the infrequency of appearances by Val Lehman, Rowena Wallace, Cornelia Francis, Wendy Hughes, Julia Blake.

Why are older women less visible in Australian popular culture than in British, American and European culture?

How does cultural invisibility impact on the lives of older women?

Gayle, Sonya and Marissa are three very different women who might not have been drawn to each other without the belly dancing, so what is it about the dancing that breaks down the barriers?

With the numbers of belly dancing classes growing daily through Australian cities, suburbs and country towns, what is it that attracts so many older women to this type of dance, and why now?

Both Gayle and Marissa have secrets that they have kept for decades; they have been changed both by the nature of those secrets and the effect of keeping them. Why, when women’s friendship is so valued and celebrated, is it sometimes so hard to reveal things about our past to our friends?

Sonya’s emotional estrangement from her family is very much of her own making. As older women do we sometimes need to protect ourselves from the expectations of our families? Is this due to our upbringing at a particular time – eg the forties, fifties and early sixties?

Is Gayle’s husband Brian unusual in his rigidity and his blinkered approach to life? Are a younger generation of men (Generation X for example), generally very different?

Oliver’s mother was a feminist and a sole parent and influenced him strongly in his attitude to women. In what ways might feminism have influenced the parenting of boys?

Frank and Marissa are both the survivors of severe trauma. Can survivors help each other to deal with the agonies of post traumatic stress disorder (PTSD)?

PTSD was only defined after the Vietnam War; after WW1 it was called shell-shock, and after WW2 it was largely ignored. It’s only now that groups and support systems are being established for WW2 survivors. How has this neglect impacted on families in latter part of the 20th century?

Sonya and Gayle are both close to Oliver, are either in love with him or he with them? Where are they all heading?