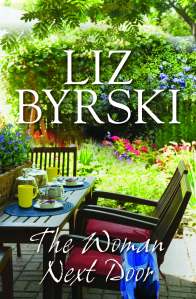 Thank you for choosing The Woman Next Door for your book club. I do hope you enjoy reading it and you have an interesting discussion.

There are some discussion points below you may like to use.

You can also download an easy to print version of the notes here –  Woman Next Door Book Club Notes.

The book is told from multiple perspectives. The four women tell the majority of the story, but the men, for example Mac and Leo, also have sections of their own.

How do these multiple perspectives affect the reading experience?

Why do you think the author included the male voices?

Joyce and Helen seem to be unlikely best friends. Joyce is quiet, aims to please and will give in to avoid conflict. Helen is direct and can be abrasive. On page 173 Joyce thinks ‘Perhaps…life is like that, people change. I’ve changed. Helen has changed. We’ve simply outgrown our friendship. Whatever the causes, something that was once very precious has juddered to a halt and restarting it is out of the question.’

What do you think the causes are? Why were they such goods friends in the first place?

Both Joyce and Helen are pre-dominantly stay-at-home wives and mothers. Why does Joyce seem to be comparatively so much happier than Helen and seemingly better equipped to deal with growing older?

Leo and Helen are not very likeable characters. Do you feel any sympathy for them?

Is there any one character from whom you would have like to have heard more? Why?

On page 35 Joyce ‘feels as though she is on the threshold of something: a new way of life, a new way of being herself, but she has no idea how to step into that.’ All of the women are struggling with change: Joyce is looking to define herself outside of her marriage; Polly is opening herself up to love for the first time in years; Helen is coming to terms with her own unhappiness and separating from her partner; and Stella’s mental health is deteriorating.

What do each of these women rely on to help them through the process of change?

Who does it better and why?

On page 42, Polly says ‘isn’t it strange that we’re so old?’ On the following page she says ‘Isn’t it odd that inside yourself you know you’re the same person but suddenly you see yourself in a mirror or reflected in a shop window and think – who is that old person that looks a bit like me?’

How do each of the characters, male and female, deal with the reality of growing older?

What effect do the changes in the women’s lives (discussed in the previous question) have on their independence?

On page 190, Helen says ‘it’s different when it’s just women… not as important, not quite the real thing.’

To what extent do each of the women have lives independent of men in the novel?

Stella is a fiercely independent woman, still working at the age of 80, which makes her struggle with Alzheimer’s and her loss of independence all the more poignant.

Polly is Stella’s closest friend. When contemplating having to care for Stella, she says on page 258 ‘I suppose I hadn’t realised that I was – am – such a selfish person.’

Do you agree that Polly, and the way she cares for and manages Stella through her illness, is selfish?

On page 293, Dorothy gives Polly some advice about coping with Stella’s Alzheimer’s. She says, ‘This is who she is now. You still see the old Stella and you grasp at that but you can’t make her come back and you shouldn’t try.’

What do you think of the advice Dorothy gives Polly?

Leo reflects on relationships on page 233: ‘The prospect of domestic bliss in retirement has always appalled Leo, but now, faced with the black hole that seems about to swallow him, he is aware that he is entirely unprepared for old age and unwilling to change any aspect of his life to accommodate it.’

Leo and Polly are both in their sixties and single, yet Polly is not nearly as apprehensive about growing old alone as Leo. Why do you think that is?

To the reader, Leo’s flaws are evident from early in the novel. Polly is an intelligent, independent woman: what makes us react negatively to him so quickly and why does it take Polly so long to see what we see?

Although Stella does indeed comment on Joyce and Mac’s relationship as being ‘very modern’, in fact the story includes various examples of ‘modern’ families/ relationships, for example, Alistair and Steve, or Nick and Gemma.

Can you point to any other examples of relationships or families in the book which might be considered ‘modern’?

Do you think the book is realistic in its portrayal of relationships in general?

What do you think the author means by ‘modern’?